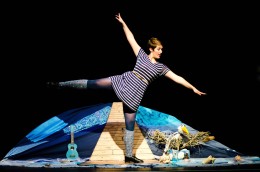 If you drew up a checklist of all the things a good children’s show should contain, The Tap Dancing Mermaid would tick every box. A colourful set, an engaging story told simply and clearly, characters worthy of emotional investment, and just the right amount of audience participation.

Delivering all this is solo performer Tessa Bide, whose warm, friendly style leads us gently but confidently through the tale.

Banned from tap dancing at home by her increasingly unpleasant aunt (ingeniously made from an old lampshade and kitchen utensils), Marina Skippett takes her talented footwork to the local jetty. There, she meets Leo the merman, who teaches Marina about his underwater world, its stories and songs (one of which we join in on, with ukulele accompaniment).

Meanwhile, the moon – our trusty narrator via a recorded voiceover – watches over Marina, and us. Not only ensuring we never lose track of the story, but providing a magical ending.

This is Bide’s first time to strike out on her own, and it’s an auspicious start. A fine puppeteer, and competent tap dancer, she also has a knack for encouraging audience involvement in a funny, natural way. Sometimes Bide plays Marina herself, then switches the character to an identically dressed puppet once things become sea-bound.

Manipulating both our tap dancing heroine, and Leo her merman pal, simultaneously with skill and precision, Bide never lets the pace drop. While the jetty itself, with its hard wooden floor, is the perfect platform for Marina to don her tap shoes and get hoofing.

A mixed audience of boys and girls, both equally engaged by the tale, proved that while the show’s title may hint at Disney-esque tweeness, this is a show for all to enjoy.