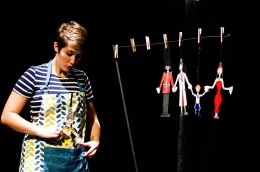 “Marina Skippett isn’t feeling like herself. In fact, she is feeling so muddled that she can’t seem to get her cardigan on right, pushing legs into sleeves and flopping material over her face. This is just one of many charming and hilarious examples which show that Tessa Bide, writer and performer of The Tap Dancing Mermaid, understands children in a way that can’t be taught…

…The Tap Dancing Mermaid has it all – it is narrated by the moon; is performed partly with puppets; includes audience interaction, from the traditional ‘He’s behind you!’ to a chance to hold treasures from the sea; there’s even a sing-a-long and, of course, tap dancing…the aunt puppet (created from a lampshade and constantly blowing her fringe out of her face); the audience becoming the echo for Marina’s tapping; the exquisite set with a seagull peering round to look at the audience – these were all ingenious.