Childplays on The Tap Dancing Mermaid 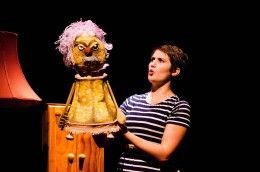 If my four-year-old’s desire to do tap-dancing had been building in recent weeks, then seeing this charming show just about sealed it!

But not only was there some rather excellent footwork from creator and performer Tessa Bide, she showed that children don’t need TV characters and huge special effects to be enthralled by a stage show, just give them a good story, imaginatively told.

The Tap Dancing Mermaid tells the story of young girl, Marina Skippett, who loves to tap dance. But her evil aunt doesn’t share her love for “tappetty tap” so Marina escapes nightly to dance to the sounds of the sea on the boardwalk and forget her troubles. Constantly watched over by a talking moon who loves her dancing and narrates the story, she meets Merman Leo and … well I won’t spoil it!

Both gentle and fascinating, the production is basically a one woman extravaganza and Bide just exudes warmth, enthusiasm and humour throughout. Marina is sometimes depicted by a puppet and sometimes by Bide who also cleverly works and voices the other character’s puppets at the same time, expertly bringing them to life.

Thought has gone into every detail. Shells, pebbles and seaweed led the way from the theatre foyer to the auditorium and words to a song were helpfully left under the seat so you could join in.

There is lots of interaction with the audience and not just in a “behind you” kind of way. Bide hands round shells to look at – and wish upon – some lucky children end up on the stage to play a conch shell and everyone gets to play different sea creatures and join in with a game of hide and seek.

All in all, Bide absolutely smashes the fourth wall – this is just everything a children’s theatre experience should be and she even stays afterwards so you can meet the puppets and ask questions.

Now I’ve just got to book those tap lessons!