Nappy Valley on The Selfish Giant 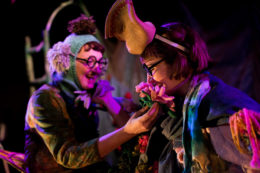 What an enchanting place to hold such an enchanting play! Last Saturday, my family and I embarked on our first play of the festive season at Omnibus Theatre in Clapham Common. The last time I was in this place it was full of books (and still a library). This time round, it was transformed into an enchanted garden through an adaptation of one of the most endearing stories to have, probably, graced the shelves of the former library.

They tell the story of Grinter, the giant who isolates herself behind high walls in her wonderful garden. One day, the kids, tired of their hard roads and grey rooftops climb into her garden to play and one little girl in particular, Poppy, thaws out the Giant’s selfish heart.

This is a beautiful tale of friendship and belonging, skilfully told through the characters, their puppets and the music.

I was initially worried that he might get bored in a play that doesn’t involve a panto style interactive cast and a revolving set with bells and whistles, but he loved it. He understood the subtleties, he felt the joy of the kids, the changing of the seasons and the kindness inside the giant. I have to say I was really proud of him and really impressed by the play.

Tessa Bide Productions and Soap Soup Theatre don’t underestimate kids, and I love that. I never thought my seven year old boy would be so attune to a giant and her little friend, Poppy.

And as a final touch to our magical afternoon, the actors came out at the end of the show for a Q&A session and a chance for the kids to meet the puppets. We couldn’t really ask for much more.