Curious Mum on The Selfish Giant 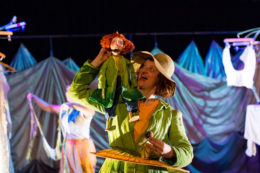 From the collaboration of the critically acclaimed Tessa Bide Productions and Soap Soup Theatre comes this cleverly and creatively imagined adaptation of Oscar Wilde’s Selfish Giant.

A giant named Grinter has barred children from her winter-entombed garden with an enormous, impenetrable wall. But wait – Poppy, a green-fingered little girl, is trapped in the giant’s garden! And so begins this tale of unexpected friendship. Poppy manages to survive the implacable winter by making her home in a large fungus. Then one day Grinter discovers Poppy tending to a lone snowbell in the garden, and their unlikely friendship unfolds as spring blossoms.

The telling of the story moves seamlessly between the actors, puppets, music and props so that the audience becomes entirely caught up in the narrative and vested in the outcome. It helps that the puppets, most notably Grinter (with her shock of red hair), are intriguing replicas of the actors. Their movements and faces are stirringly life-like, and Poppy’s puppet even grows with her throughout her time in the garden! Nature herself is personified by two actors, who chat humorously, and adorn the set with their own clothes as the seasons change. A green floral skirt is swapped for a white cardigan and blouse in a pleasing visual representation of the passing of time.

An unexpectedly dramatic and heart rending scene comes after Grinter evicts Poppy from her garden, with her pain at the loss of her friend exemplified by the puppet Grinter staggering across a wind and snow-swept terrain to haunting music. It left even the adults in the audience taken aback by the powerful effect of the scene.

This is an intricate production which surprises with many evocative moments, which is no mean feat when performing with puppets! Its innate visual appeal makes it both a performance for very little ones and for older children in whose minds and imaginations the beauty of this play will remain for a long time to come.