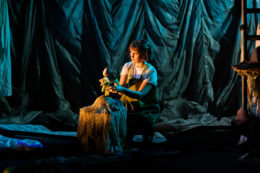 Christmas has the power to bring about personal transformation; the season of goodwill can thaw even the most miserly of hearts – just ask Scrooge or the Grinch. Oscar Wilde’s The Selfish Giant has this Christmas miracle at its heart: it’s the tale of Grinter the giant whose unwillingness to share her beautiful garden casts it into a perpetual winter, a spell that can only be broken by changing her grumpy ways.

In Tessa Bide Productions and Soap Soup Theatre’s adaptation, the giant’s garden is created from a series of washing lines, Spring hanging its flower-print dress and other colourful clothes out to dry, to be taken down and tidied away by Winter. These sturdy airers double as a climbing frame, gleefully explored by the children who sneak into the giant’s backyard to climb the trees and swing from the hanging vines. It’s a beautiful design with a very clever concept, though at times the stunning set and imagery struggle to communicate the narrative singlehandedly – at first, for instance, I mistook the giant’s actions as tearing the garden down rather than building a wall.

Tessa Bide and Tomasin Cuthbert perform and puppeteer all of the characters, the show playing with perspective and size throughout. The brave, sweet Poppy is most often a tiny puppet (Tessa Bide) loomed over by Cuthbert as the irritable giant. At one point, however, Cuthbert is both puppeteer and stage, animating the Grinter and Poppy puppets on a wicker frame tied around her waist. Filled with moments like these, intricate puppets and an interesting design, The Selfish Giant is simply lovely to look at.

Beyond visuals, The Selfish Giant is a fairytale that feels very relevant despite being 130 years old. There is, of course, a nod towards environmentalism – the characters are threatened by changing seasons, an issue quelled – in Omnibus’s production – in part by being kinder to and more aware of nature and its needs. But perhaps even more pertinent to 2018 is Grinter, a landowner whose selfishness lies in her insistence on sovereignty, who builds an unnecessary wall, and enforces a meaningless border to keep children out. In the end, its young people who change things for the better. The Selfish Giant really is a story for our times.