On The Beat on Perfect 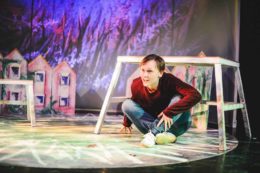 If I had to sum up Perfect in one word it would simply be that: perfect. Dealing with quite a delicate subject matter, the production delivered its message flawlessly for a young audience. An adaptation of the book of the same title by Nicola Davies, we follow the story of a young boy discovering he’s going to have a little sister. His excitement at the prospect of having a life-long best friend is heart-warming, overwhelming and quite beautiful to watch. But the playmate he imagined isn’t exactly like the reality, as he discovers his sister is born with a disability.

We see his journey from shock and disappointment to understanding and acceptance.  Learning with him, he teaches us about his favourite bird: the swift. We watch him find one injured and believed him to be as perfect as any other. In this moment, we see him realise his unconditional love for his sister despite her disability.

One of the most poignant things about this production is the names, or more so that lack thereof. No character has a name; we don’t even learn what disability the baby has. There are no labels, no classifications, no categorisation of the characters. We are unable to bring unconscious bias or prejudge them and unable to imagine them as anyone but possibly ourselves. This seems especially significant for introducing the subject of disability to a young audience, “what can’t she do daddy?” the young girl in front of me asked her dad. Clearly showing that if some children didn’t quite understand, it still opens up the conversation of disability.

The reason the message was delivered so beautifully by Tessa Bide Productions was because of the astounding performances from the actors. Tessa Bide’s soothing performance of the caring and gentle mother juxtaposed the energetic and animated character of the young boy, embodied by Eline Hallem. Their interaction with the audience was seamless, delving in amongst us, we were constantly involved. The actors even stayed behind after the performance to make origami swifts with the children, an endearing touch to the show. Hallem and the boy were indivisible. She became him and captured the beauty of children’s wonder, as he fixated on the magical birds that nested by his house.

The stunning design and animation helped bring the story to life. It gave us a window into the boys’ imagination, as we see how he hopes to play with his future sibling and how he imagines flying beside his favourite birds. The imagery payed tribute to the incredible illustrations of the book by Cathy Fisher, the talent shown in every inch of this performance was astronomical.

For this production the company worked with Sibs, a UK charity that supports siblings of disabled people with some of the challenges they face in their family lives. They help children have positive relationships with their disabled brothers and sisters and to be able to choose the role they pay in future care and support.

​Not only does this production introduce the subject of disability to children, it reminds adults about the innocence of childhood and the acceptance of all.