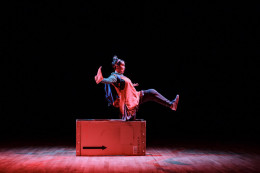 Tessa Bide’s research for A Strange New Space took this excellent storyteller and puppeteer to Greece, among the refugees and squats in the camps there. Getting to know some of the children, adults and volunteers, Tessa was able to more easily base the life of her protagonist, Amira, on their stories and, more importantly, to broach the subject of loss and dangerous journeys with sensitivity.

Using a mix of music, puppetry and just a handful of props, Tessa tells Amira’s story in a way that engages very young children; her journey across the seas in search of the mother she has lost after their house is destroyed draws the audience in – they want to help their new friend, this fellow human being. All the while, Amira (Bide) begins to trust these strangers and, throughout the 45-minute performance, she never loses their attention.

This is a very lovely show not just about the journey and adventures of a refugee child but about the brilliance of the imagination. Although she has barely any possessions, Amira turns each one into a play thing, expressing the wonder of childhood, something that every member of the audience seems to connect with.

Tessa Bide aims to travel the globe with this word-free performance and she would like to perform to audiences in refugee camps; the warmth with which she tells Amira’s story will certainly mean that A Strange New Space is a hit wherever she takes it.

I thought A Strange New Space was really good because you really had to use your imagination, especially because there was no talking. I really like how Tessa Bide incorporated the audience into her performance and made it really fun. I also liked how she used everyday objects and turned them into toys. I loved all her ideas and the planning of the show. The music and sound effects she made were not only good they also were fun to hear. I think the show was about a lost refugee girl who had nobody to care for her – that’s where the audience came in; they helped her along the way and all her toys became her friends.