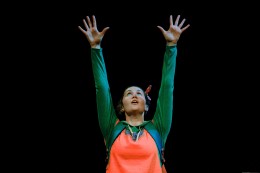 Amira is space-obsessed and trying to finding her way around life and journey as a refugee. Like every child, she creates a world of adventure, wanderlust and humour in her imagination, and can be a child’s best friend when things are troubling them. Amira uses puppets, a cardboard box, lights and everything a child could possibly use in imaginative play. Aiden followed Amira’s journey and immediately understood what the show was about on its basic level. He could see how Amira was feeling: happy, sad, scared, silly, lonely and could identify with it. There is an awful lot of humour in the show which had the children laughing lots. The show is not obviously about refugee issues to children but it was more about connecting with children and to the basic feelings and emotions children have for survival. Aiden immensely enjoyed this surprising little gem and we were really glad we got the chance to see it together. We thought this was a really special and endearing little show which shows the power of a child’s use of escapism as a way of dealing with trauma. It also drew adults in, in connecting to the inner childhood. It’s a non verbal show but has music, strong visuals and gets you to use your imagination as well. A very special show not to be missed.